It's Not Just You: Freeing Women To Talk About Sexual Sin And Fight It Well 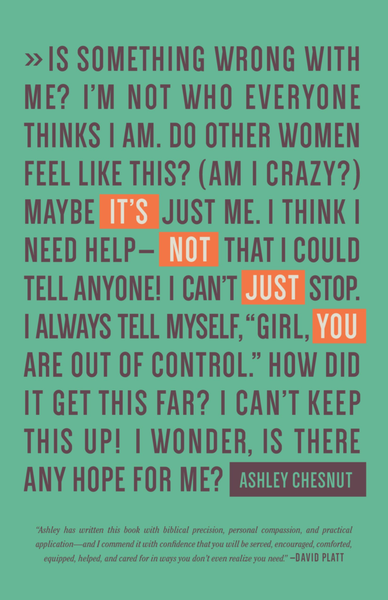 It's Not Just You: Freeing Women To Talk About Sexual Sin And Fight It Well

There's no way other women are struggling sexually like I am. Who could I even talk to about this? Isn't this a guy's issue?

God has already won the war against sin, and as you examine His Word along with Ashley, you’ll be equipped to battle against sexual sin and to aid other sisters in the fight.

No, it’s not just you. And yes, you can take steps toward victory. Right now.

Ashley Chesnut serves as the Associate Singles 20s/30s Minister at The Church at Brook Hills in Birmingham, Alabama. She has a Master of Divinity from Beeson Divinity School and a Certificate of Biblical Counseling from Southeastern Baptist Theological Seminary. While Ashley has a passion for discipling young women, she also loves her city and has written a children’s book about it called Down in the Ham: A Child’s Guide to Downtown Birmingham. When she’s not at the church or meeting with girls, you can probably find her at the farmer’s market or trying some new local restaurant.

It's Okay Not to Be Okay

The One Year Love Talk Devotional for Couples, Leatherlike

The One Year Love Talk Devotional for Couples, Paperback

Just in Case You Ever Wonder

He is Enough: A 6-Week Bible Study of Colossians

Ten Words to Live By: Delighting in and Doing What God Commands